A confusion matrix is an instrumental measurement to observe the way the model performs wrong or right. It is a matrix that compares several predictions for each class correctly and incorrectly classified by the model. 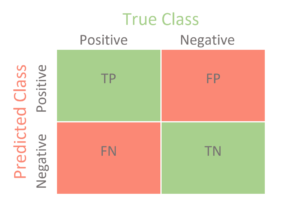 In the confusion matrix, there are mainly 4 measurements of terms related to the model’s error, using which we can measure the model’s performance in different ways.

I. True Positive (TP): The number of positive observations the model correctly classified as positive.

II. False Positive (FP): The number of negative observations the model predicted as positive values. It is also known as a Type 1 error.

III. True Negative (TN): It is the number of negative observations which the model predicted as unfavorable.

IV. False Negative (FN): The number of positive observations the model incorrectly classified as negative values. It is also known as a Type 2 error.

The accuracy score is the ratio of correctly classified predictions and the total predictions done by the model trained.

It is the most widely used cost function used in classification problems.

In some cases, the accuracy score is not an idea cost function for measuring the model’s performance. e.g., e.g.le working on any healthcare project, if the accuracy is 99%, it will still not be considered the best performing model, and there should not be any risk related to human life.

The main aim of a precision score is to reduce the wrong prediction, i.e., false positive and false negative.

Precision in classification problems is referred to as quality. Higher accuracy means the model returns quality results, and most of the results from the model are good in quality and uthentic.

Example: If the model predicts the express mail as spam, but it is not spam, then it is considered a false negative.

Recall Score is the correctly predicted pass or fail value ratio by its total receipt or fail predictions.

Recall score in classification is referred to as the quantity, which states that higher recalls mean the model return most of the relevant results. Whether it is appropriate or irrelevant, results are also returned.

The F-Beta score is the harmonic mean of the precision and recall score. Where the B (beta) parameters define the recall weight in the combined score.

Sensitivity is a metric that is used to evaluate the ability f the model to predict the true positive of all available categories.

A Higher sensitivity test means that there are few false negative results.

Specificity is the performance of a model to predict the true negatives correctly.

A higher specificity test means that there are few false positive results.

It is the ratio of true positives by the true and false positive predicted values in the model.

It is the ratio of true negatives by the true and false negative predicted values in the model.

In classification problems, it is necessary to rely on multiple metrics to confirm whether a model is performing better. The receiver operating characteristics or ROC curve is a plot of True Positive rates vs. True negative rates. It is also called that it is a plot between sensitivity and (1-specificity).

The area Under the Curve or AUC can be referred to as the ROC curve’s summary, with values between 0 and 1. The value 1 of AUC means that the classifier performs very well and makes no mistakes. In contrast, while the value 0 for AUC, the prediction phase implies that the classifier predicts the values very severely, for example, positive as negatives and negatives as positives.

The ROC-AUC Curve can be plotted for the different machine-learning algorithms to compare the results from the prediction phase.