The Need for Nag Optimizer

The Mathematics Behind Nag

In the case of the normal gradient descent optimization technique, the formula for weight update is

Where,
Wnew = The new updated weight
Wold = Old weight, which is to be updated
n = learning rate
dL/dW = derivative of loss with respect to weight

In the case of the momentum optimization function, the formula would be

Here the weight update will happen with momentum, where the oscillations of epochs need to converge to the solution can be reduced by tuning the decay factor (Y).
So here the new weight would be the value obtained from the velocity term subtracted from the old weight. where the velocity term is the form that provides momentum to the optimizer.
In momentum gradient which is the sum of two terms past velocity and gradient at a particular point. So here in the graph of loss vs weights, the path of the point on the gradient will be decided by these two terms. Basically here there will be longer jumps as there are two terms the normal gradients value and the past velocity push from the point.
So by wicking the formula of momentum gradient, we can easily achieve the Nesterov gradient, basically, the main difference in these two optimizers is just an update from where it will be calculated.
In momentum, the update of the weight is basically calculated with two terms, momentum t that point and past velocity at a single time, but in the case of Nesterov accelerated gradient the weight update is calculated stepwise, basically the weight update will occur first according to the history of velocity and then the gradient at that particular point in step 2.
So basically, in momentum both of the steps will occur simultaneously whereas in the Nesterov gradient both of the steps will occur step by step and because of this the Nesterov accelerated gradient always performs better than the momentum gradient optimization technique.
The formula for the NAG optimizer is

As we can see in the formula of the Nesterov gradient, the weight update will occur according to acceleration and the formula for final weight update represents an accelerated term which is a stepwise execution of the history velocity term and the gradient at a particular point.
The update formula is very similar to the momentum term, just an additional term of look ahead. look ahead is a term that represents the point where we will reach after the jump from the momentum term. mathematically the look ahead term is a term that is obtained by the substation of old weight and the momentum after the first jump.

Why Nag is Faster? 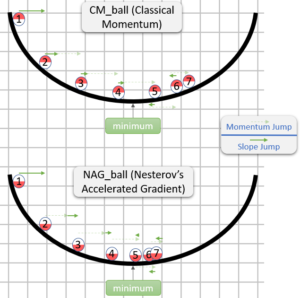 There is not any specific class in Keras to implement NAG Optimiser but we can use the Nesterov parameter by using the parameters available in other optimizers.

For example if you want to implement NAG Optimiser in stochastic Gradient descent then there are parameters in it using which NAG can be implemented.

To implement NAG in SGD, Use the parameter named as “Nesterov”, and pass the value True in it, by doing this the NAG will be automatically implemented in SGD.

Some Key Takeaways from this article are: